An exposure draft of the Bill is now available to the public for comment. Click here to view the draft Bill.

We have provided responses to the following questions:

Why is this Bill needed?

There have been increasing media reports of some of the listed properties being used as party-houses to host out-of-control parties that disrupt entire neighbourhoods.

Residents that live next to party houses have had repeated handballing of the issue between SAPOL and local government.

It has forced some to sell their houses at significant losses or stop having relatives visiting them.

What changes does the Bill propose to make?

This Bill aims to address the issue of residents being negatively affected by living next to party houses.

The Bill will require all people who list a property on a short-term rental basis to:

Isn’t more regulation a way of killing off AirBnb/Stayz?

This Bill is designed not to harm the short-term holiday rental industry.

This is a common-sense approach to dealing with problem party houses.

If a house listed on AirBnB or any other platform is causing severe disruption to a neighbourhood, there needs to be a way that this can be addressed in law.

At this point in time, there is insufficient legal remedy for affected communities.

Should all party houses be banned?

People that own a party house need to be held accountable to ensure that they are not disrupting the community around them.  This is not an “anti-party” Bill; it is legislation that is designed to keep accountability.

What are other jurisdictions doing? 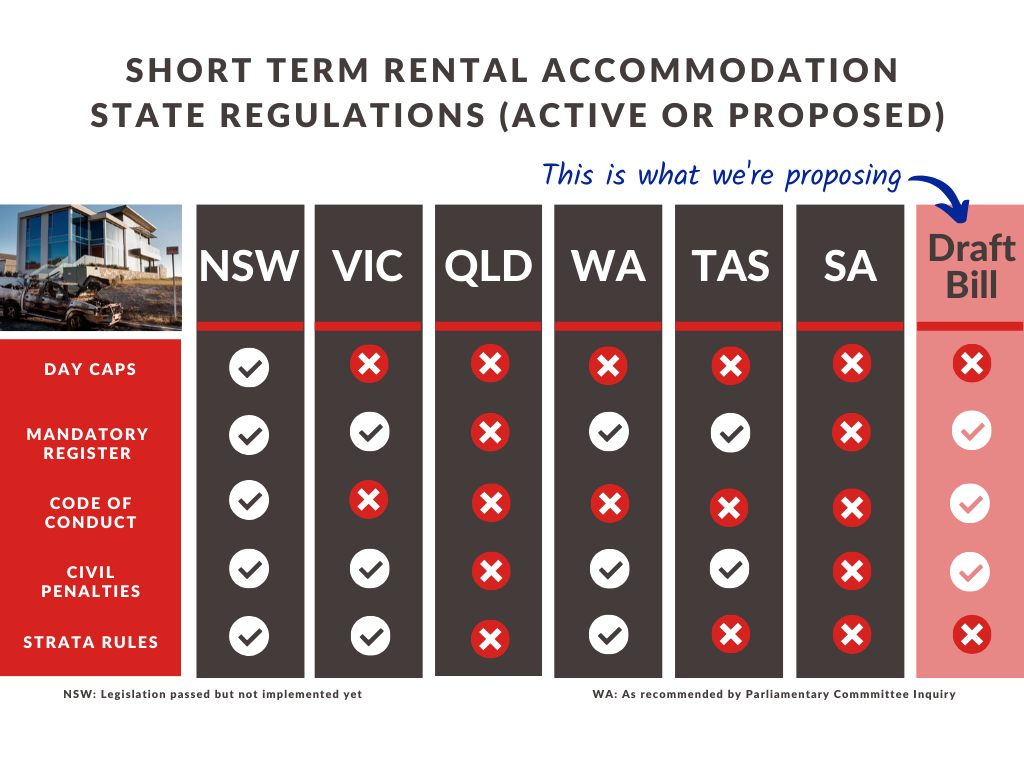 New South Wales recently held as Parliamentary Committee process on the sharing economy in late 2016.  The NSW Government tabled a response in April 2017 and passed legislation in 2018.

Victoria, Queensland, Western Australia, Tasmania all have regulations in place or in the process of implementing or investigating further regulations.

What is the Code of Conduct?

The Code of Conduct is in response to concerns regarding the responsibilities of operators and residents of short-term holiday rental accommodation.  It establishes guidelines of acceptable behaviour for the host and guests.

What is considered loss of amenity?

An amenity refers something that is considered a benefit to a property, thereby increasing its value. This can refer to tangible amenities such as access to swimming pools, parks. Communal areas, bike paths, garages and internet. Intangible amenities also include as well-integrated public transport, pleasant views, nearby activities and a low crime rate.  In some instances, where it applies access to clean air, water the quality of any other environmental good that may reduce adverse health effects for residents or increase their economic welfare, like loss of income.

What type of disruptive behavior has been reported?

How would this affect operators of residential holiday properties?

The Bill proposes changes that will significantly increase transparency of holiday rental accommodation to understand its representation within the tourism industry.

Will this increase costs?

By design, the proposed registration system will be basic and easy to register.  The new penalties created in this Bill are designed to ensure that owners of party houses remain accountable in their responsibility not to disrupt entire neighbourhoods.

The Bill clarifies a short-term holiday rental accommodation provider is not liable for paying compensation if the South Australian Civil and Administrative Tribunal is satisfied that the provider took all reasonable steps to prevent an occupant from engaging in the conduct that led to the making go the order.

In accordance with the Bill, an application for registration of a holiday rental property be accompanied by a registration fee determined by the Commissioner for Consumer and Business Affairs.